Achtung Camper reporting on the latest and greatest from the campervan world internationally.  We recently attended our second Caravan Saalon Exhibition in Dusseldorf, Germany and got to see what the biggest and best companies from Europe and the UK are doing campervan and motorhome wise. The first thing that hits you when you attend a caravan and camping exhibition overseas is the sheer size.  We are used to (what we feel are!) very large exhibitions with lots of sheds and km’s to cover in Australia.  Arrive at an exhibition in Europe and you’ll see just how small the market is here.  The vast array of (often extremely similar) campervans on offer is baffling.  How can any of these companies compete with each other when they all look so similar!  That question is answered by walking through the streets in any German town – where you will spot at least one new T6 campervan or old Westfalia parked on pretty much every street corner.  Campervanning is BIG here!  And with THEIR climate, you’d wonder how so many people find the cash to finance a camping mobile they probably won’t be using for 50% of the year due to the hard winters.

And the differences in travelling style that the climate and landscape bring are reflected in the features included in the campervans built for travel in the UK and Europe.  Densely populated areas and no long dry spells of unrelenting heat mean it is always easy to fill up water and food no matter where you are on your travels.  Unlike Australia where you might drive for days without a clean water source or food store, it is not necessary here to be as self-sufficient as it is during an Australian road trip.  We considered the harshness of the Australian when looking the features in 90% of the campervans on offer in Europe and the UK:

We were disappointed and proud all at once, on one hand there was little to learn from companies who have LESS features and usability than an Achtung Camper.  Conversely, we were proud when it sunk in that these guys actually have it a lot easier than the folk building campervans for the Australian public.  Sure, it’s easy to build a van with minimal cabinetry, water and food storage.  But Achtung Camper (and the handful of other Australia suppliers) had managed to fit so much more into that small space, and still make it liveable.

Our disappointment continued when we finished our third enormous hall of campervans on show.  Westfalia (the original VW campervan converter and still the most prominent) and 90% of the other companies all had the same modern grey interior.  Yes, it looks slick and inoffensive, but to us? It’s just plain boring!   Where were the crazy fashionable boundary pushing interiors?   (In Geelong, apparently!) Then we came to a very small setup with only two vans on show and two young men talking to the press.  The German company called Kampagnia was opened only 2 years earlier and offers about 20 different film faced formply colours to choose from for your cabinetry.  Colours we could only dream about were available here.  After chatting to our new friends for a while we found many similarities between their company and ours, two young people with a drive to do something different and let clients personalise the look of their vans, a drive to do something colourful and cutting edge. Another company worth mentioning – Dogs Campers (crazy considering having a dog as a pet is not nearly as popular in Germany as it is in Australia).  That’s right, campervans designed specifically for the camping dog owner.  We loved some of their features such as the integrated dog cage but didn’t really like the brash dog-related branding on the outside of the vans. That’s not to say we didn’t get some great new ideas from the exhibition  and European market offerings.  Quite the contrary, Achtung Camper are now working harder than ever to integrate some awesome new features to our range.  Here are some of the ideas we are currently working on for our vans:

The real highlight of the exhibition (besides the free champagne and finger food at 10am on Trade Day!) – being able to step inside a 1.5-million-euro motorhome.  Yes, something this crazy and ridiculous exists.  Check out the pics below and dream away…! 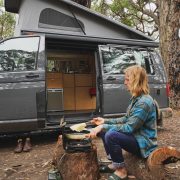 CAMPERVANS FOR SALE IN ADELAIDE 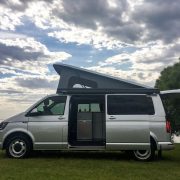 How to buy a campervan in Australia 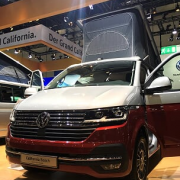 To pop top or not to pop top? That is the question…

WHAT TO AVOID WHEN LOOKING FOR THE PERFECT CAMPING SPOT

Campervans for sale in Tasmania
1 reply

Want to join the discussion?
Feel free to contribute!